After unpacking new purchases, prior to planting, put them into a cool, light, well-ventilated and frost free place, away from direct sunlight.

Winter hardy varieties can be planted in early autumn, otherwise plant between February and April, as soon as the soil is sufficiently dry and warm; in practice this is usually late winter or early spring for sandy soils, and mid-spring for clay-based soils. Heat-treated onion sets (which have had their flowering potential suppressed, so are bolt resistant) should not be planted before late March or April.

Prepare the soil by digging over and incorporating some fertilizer, work the soil down to a fine tilth as if preparing a seed bed.

Onion and shallot sets are planted into a shallow drill (groove) in the soil about the same depth as the set, or a bit less for some of the longer sets (many shallots, for example). Alternatively plant them individually with a small trowel. It’s not advisable to just push them into the ground as this may cause damage.

Remove any loose papery skins before planting the sets. Spacing can be anything from around 10cm (4in) apart for onions and around 25cm (10in) for shallots, depending on the size of bulbs. Closer spacing results in large numbers of small bulbs, whereas wider spacing results in a smaller number of large bulbs.

When they are planted, the tips at least should still be protruding from the soil surface.

The ‘Dave’ approach is to start sets off in modules and then plant out when conditions are right. This bypasses bad weather problems, allows sifting out of the occasional dud and avoids the annoyance of finding your sets pulled out of the ground by mischievous birds.

In the spring there is rarely the need to water newly planted sets. But in dry spells later on in the summer and autumn, new plantings of overwintering onion sets should be watered in after planting.

Keep weeds checked as dense weed growth will seriously affect yield. Water if the weather is dry (not otherwise) and feed occasionally. Feed an autumn-sown crop with a liquid fertilizer in March.

Onions form a bulb when the temperature and the number of daylight hours hit the right combination for them which triggers their clock. Until that happens, onions use the daylight to produce a good deal of top growth before they form bulbs (and the more top growth, the bigger the bulb). When the daylight reaches the right number of hours for that variety of onion, the onion will stop forming top growth, and form a bulb instead. The size of the bulb that eventually forms depends on the size of the "stalks", and the number of them. There will be 1 ring in the onion for every stalk that formed, and the larger the stalk, the larger each ring will be. Bulb formation will pause though during dry, very hot or very cold weather.

Remove any flower stems which appear. Mulching is useful for cutting down watering and for suppressing weeds. Stop watering once the onions have swollen and pull back the covering earth or mulch to expose the bulb surface to the sun.

When the bulb is mature the foliage turns yellow and topples over. Leave them for two weeks and then carefully lift with a fork on a dry day.

Store in trays, net bags etc; anything where the air can circulate. Choose a cool and well-lit place to store them where they will keep until late spring.

If you have any comments on these notes or alternative advice then please let us know. 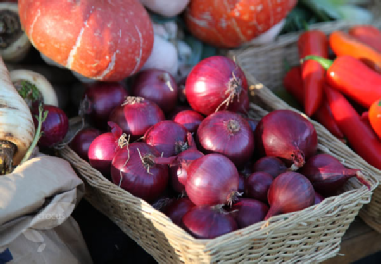 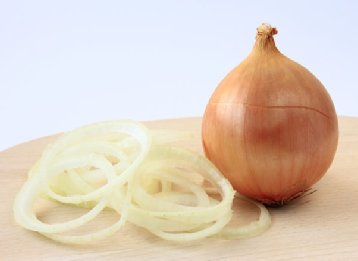 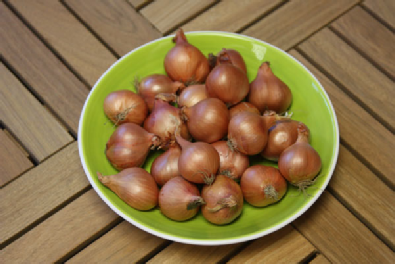 Onion sets are the easiest way to grow onions in the garden. Planted in March or April, they will mature faster than onions grown from seed. 'Sturon' is a flavourful variety which produces round, straw-coloured onions that mature in August.

Sets are the easiest way to grow shallots in the garden. Planted very early in the season, in mid-February if possible, they mature faster than those grown from seed. 'Golden Gourmet' is a very high yielding, Dutch variety that can be harvested as early as July. It has a golden brown skin, stores well and has better resistance to bolting than many other varieties. 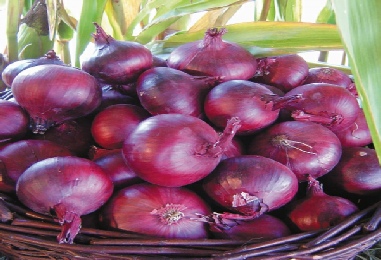 The Shop stocks a few varieties of sets - some for spring planting and some for autumn planting (over-winter types). You may prefer to order other varieties from our suppliers - more options but at a higher price. For spring planting you may prefer to order heat-treated sets which give higher yields and reduce the risk of bolting (producing seed heads); these will arrive much later as the treatment takes time. We do not stock heat-treated sets.

Spring planting sets arrive early in the year (usually January) while the autumn ones arrive around September time. In spring we have Sturon and Red Baron onions and Golden Gourmet shallots. In autumn we have Shakespeare and North Holland Blood Red onions and Jermor shallots.

Sarah Raven says that it’s the best spring onion you can grow, with rich-crimson outer skins and round generous bulbs. They can be grown from seeds or sets. If you fail to eat them as spring onions - thin to perhaps 5 inches to allow development of the bulb,

Shakespeare is an over wintering onion type. This hardy variety has been bred in Britain, to withstand the British climate  and has been used commercially for many years

A long French speciality variety - delicious, mild yet well flavoured ,rosy fleshed shallot. Excellent quality and stores well. Commonly considered one of the best tasting for cooking, this is sometimes known as the banana shallot 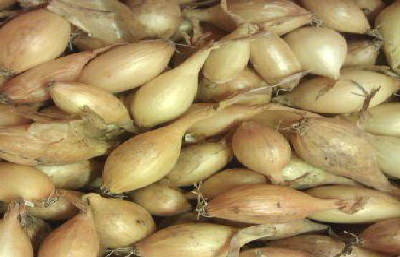 RETURN TO TOP OF PAGE